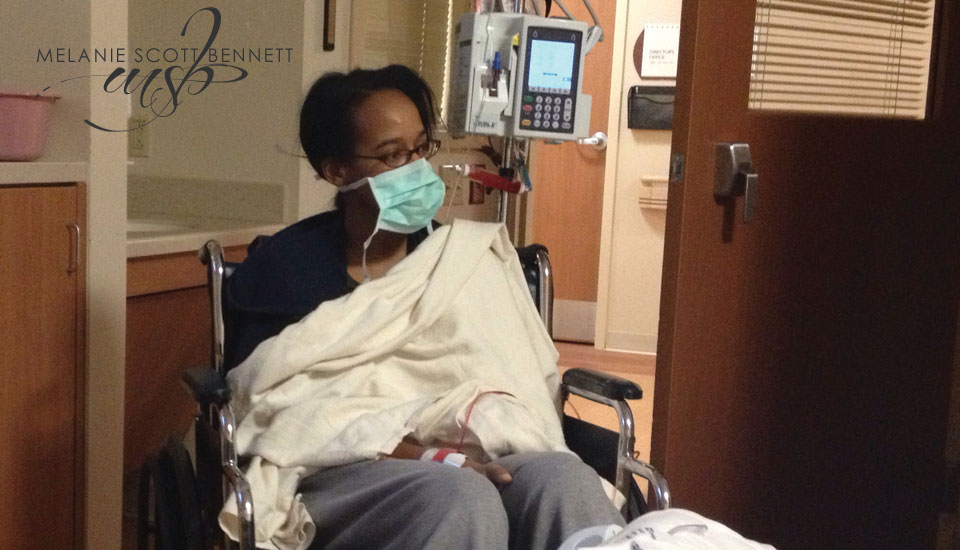 I slightly struggled with what my first post would be, but I decided to just start at the beginning and tell you my story. In December 2012, I was living and working in Orlando, FL going about my “normal” routine of juggling work, ministry, community activities, business, travel, family, and all of the other things young urban professionals fill their plates with in their pursuit of leaving the world a better place. One evening, I woke up gasping for breath in the middle of the night. I just thought it was a fluke until a few days later, the same thing happened, except during the day. Throughout the month of December it continued to happen and I also began to experience heavy fatigue. My fiancé admonished me to go to the doctor, but I had never had a major illness in my life and furthermore I just had an annual check up in October and everything had been fine. So, I brushed off his concerns and told him that I was probably fatigued from my hectic schedule and just needed a vacation.

During the first week of January 2013 the sporadic breathing was becoming more frequent and I began to see bruises on my body, so at this point I began to take my fiancé’s concerns more seriously and decided to schedule an appointment with my doctor. I went in to get my blood drawn on a Friday and on that Monday my doctor called me urgently to come in. Not understanding the severity of the call combined with pressing deadlines at work, I waited until lunch the next day to call back and go in. When I left work on Tuesday, January 8, 2013, I did not know that my life would be changed forever. After I arrived at my doctor’s office, she showed me a piece of paper that had a right column with my blood counts from October and a left column with my blood counts as of that day. All of them had dropped more than half and my white blood cells had tripled. My doctor told me that she thought I had Hemolytic Anemia, but would have to consult with a Hematologist in order to verify. At this point, the level of alarm had still not went off in my head because I didn’t really know what any of this meant and I certainly didn’t know what a Hematologist was.

She left the room to phone the Hematologist to see when she could see me, but when she came back she told me that she couldn’t let me go home and that I would need to call my parents because she was admitting me into the hospital. I was in a state of shock. Questions and thoughts immediately began to spill out. Why do I need to go to the hospital?! I feel fine. I’m a little tired, but I just need to go home and take a nap. Why can’t I just come back tomorrow to meet with the Hematologist?! My doctor, not seeming to miss a beat, very gently explained that if she allowed me to go home that I would bleed to death because I didn’t have enough platelets to survive.

I received blood and platelet transfusions after I was admitted into Florida Hospital East, but no one could seem to figure out what was wrong with me. I will never forget on the morning of January 10, 2013 around 6am God spoke to me very clearly and said “Things will get worse, but you already have the victory!” About thirty minutes later, my primary care physician, the same one who had admitted me into the hospital, came into my room and sat on my bed looking at me very gravely. She explained that she wanted to be the first person to tell me that I had something called leukemia. I looked at her perplexed with again tons of questions filling my head. What was leukemia? How did I get it? Is there a cure? What does this mean? Am I going to die? After trying as best as she could to reassure me, she said that a lot of people would be coming in to talk to me and it may become overwhelming, but to make sure I asked lots of questions and that she would be there with me every step of the way. Once she left my room, I remembered what God had already told me and I called my fiancé, my sister and my parents.

True to my doctor’s words, my hospital room became a revolving door of doctors, specialists, nurses and I quickly became overwhelmed. They moved me to the Hematology/Oncology floor and on Friday, January 11, the day after I was diagnosed with Acute Lymphoblastic Leukemia (ALL), I started my first round of chemotherapy. (What I later found out was that if the disease had gone untreated for another month, I would’ve died. Thank God for a loving and concerned fiancé!)

I had heard about people undergoing chemo and knew that it was no walk in the park. I must honestly say I was scared and that first night I couldn’t stop shaking. Before this, I had trouble taking a simple Advil for cramps, so I was extremely nervous about how my body would react to being pumped full of poisonous medication designed to wipe me out. That’s when God spoke to me again, but this time through a dream. In this dream, my hands were shrunk down similar to that movie “Honey I Shrunk the Kids”. I couldn’t seem to do anything because my hands were so small. Then I saw another set of hands that were enlarged almost like the Incredible Hulk and they could do anything. I realized that these were God’s hands. God said to me “Your hands are too small. I got this. My hands are big enough. I got you. Lay hands on every part of your body that you feel pain and I’ll take it away.” (And He did!) 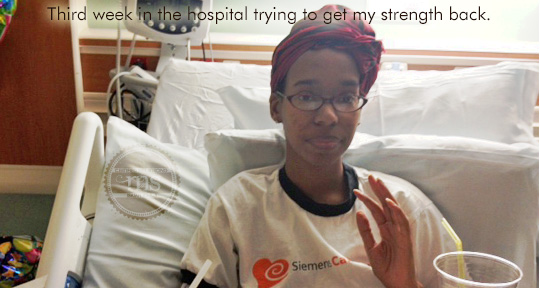 Thirty one days later, after a very tough induction round of chemotherapy, I was released from the hospital. I can’t even begin to tell you how elated and thankful I was to be out of the hospital and to feel the sunshine on my back, smell fresh air, ride in my car, sleep in my own bed without nurses coming in every hour, sit on my couch, walk around without being attached to an IV pole, shower in my own bathroom. We take so many small things for granted! I was so grateful!! Nonetheless, what I soon found out was that my process was far from over.

The next day, I lost all of my hair. Then, two of my siblings got sick with flu like symptoms. Two days after that I was readmitted back into the hospital for multiple infections. As if things couldn’t get any worse, the next day my grandmother passed away. I didn’t understand why this was all happening, but I immediately clung to the scripture in Job 19:25 – “Though He slay me, yet will I trust Him.” He had already told me that “Things would get worse, but I already had the victory.” I’m so glad I serve a God that cannot lie! My job was to trust Him. So, I began to bless God. I know it might sound strange, but in Psalms 34 David said “I will bless the Lord at ALL times.” When he wrote that, he was hiding in a cave, not sitting in a palace. I was an expert at blessing God before I got sick. I needed to bless Him during one of the lowest points of my life. Praise confounds the devil and I needed to serve notice on him that he was NOT going to steal the victory from me. I changed my pity party into a praise party. Everything was going to be all right. God’s going to get the glory out of this! 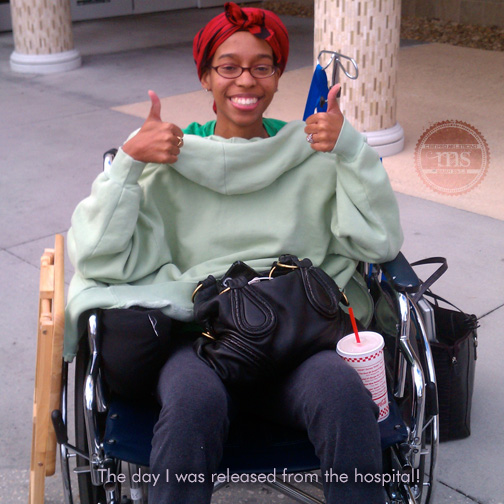